Recently I was required to convert Cisco 1142 access points from Autonomous IOS to Lightweight IOS with the addition of a Cisco 5508 Wireless LAN Controller. It was actually surprisingly easy once I got my head around it all.

It did take a bit of initial prep work to identify what was AP's were located where, and on what IP addresses. For the sake of clarity, I also setup DHCP reservations for the AP's so they would keep the same IP addresses via a DHCP reservation on the server. If I did have to troubleshoot issues with a particular AP after light weighting the IOS I then loose the hostname and any other details related with the old autonomous config. So I setup a spreadsheet with AP name, IP address & MAC address of each of the WAPs. In this case I had 16 which took probably around 15 minutes to get all this info using telnet with the CDP neighbours command.

Once I had all my Autonomous details, I then proceeded to create DHCP reservations on the server.

Once the controller is configured. A TFTP server will be required for the download of the lightweight IOS, set this up on a workstation on the network. TFTPD is my TFTP server of choice (Just be sure to disable DHCP server within TFTPD if you already have an existing DHCP server on your network!!) the lightweight IOS that I am using with the Cisco 1142 Access points is c1140-rcvk9w8-tar.124-21a.JA2

The lightweight image filename will always contain an rcv within the name.

Start by connecting to each autonomous WAP via telnet. Execute the following command. From the enable mode.

Once executed, you should see something similar to the screenshot below. The command will delete the existing autonomous IOS and replace it with the LWAP IOS. 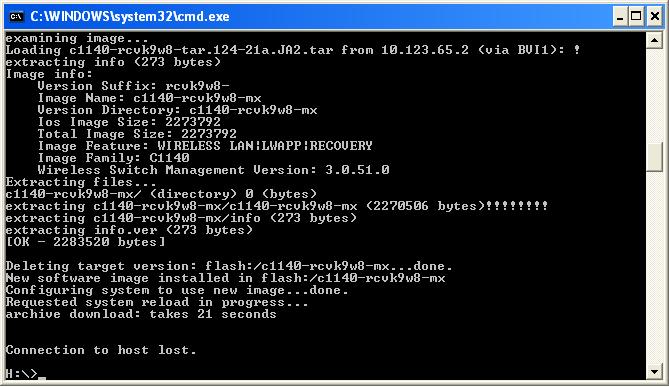 Once the process has finished copying the ios from your TFTP server, the WAP should reboot and the lightweight IOS will load. Then your WLC should pick up the fact that there is a new lightweight AP on the network and manage it.

From there you will then be able to identify the newly IOS'd lightweight WAPs from the list of devices via the MAC address that we recorded prior to changing the IOS.